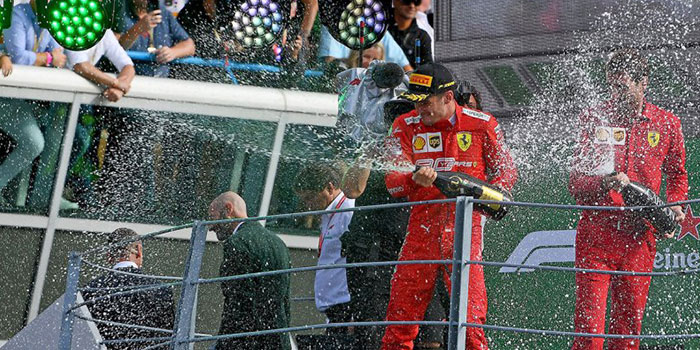 After Leclerc’s first win in Spa, his triumph was repeated in Monza. If he wins again in Singapore, that will make him the third F1 driver that has ever achieved that.

Ferrari was late to have its first win this year, but Leclerc managed to bring things to a balance with his two consecutive victories.
His first took place in Spa and the second ne in Monza, Italy.
That way, the young driver confirmed that his first win was not some kind of one-hit wonder.

On the contrary, Leclerc now is placed among a small group of nine drivers, that have managed to win in a second grand prix as well.
Before Leclerc, Hamilton was the pilot who managed two consecutive wins, in 2007.

If Leclerc wins in Singapore, that will make him the third driver to own this record.

It’s also important to note that Leclerc became the twelfth Ferrari driver to win in Monza while his win was the 237th for Scuderia in F1 and is a new record. After Monegasque, Hamilton counts 8 wins this year, while Botas, Verstappen and Leclerc all have 3 wins.

Competitors unofficially accuse Ferrari of regulations infringements that have to do with its engines, saying...More